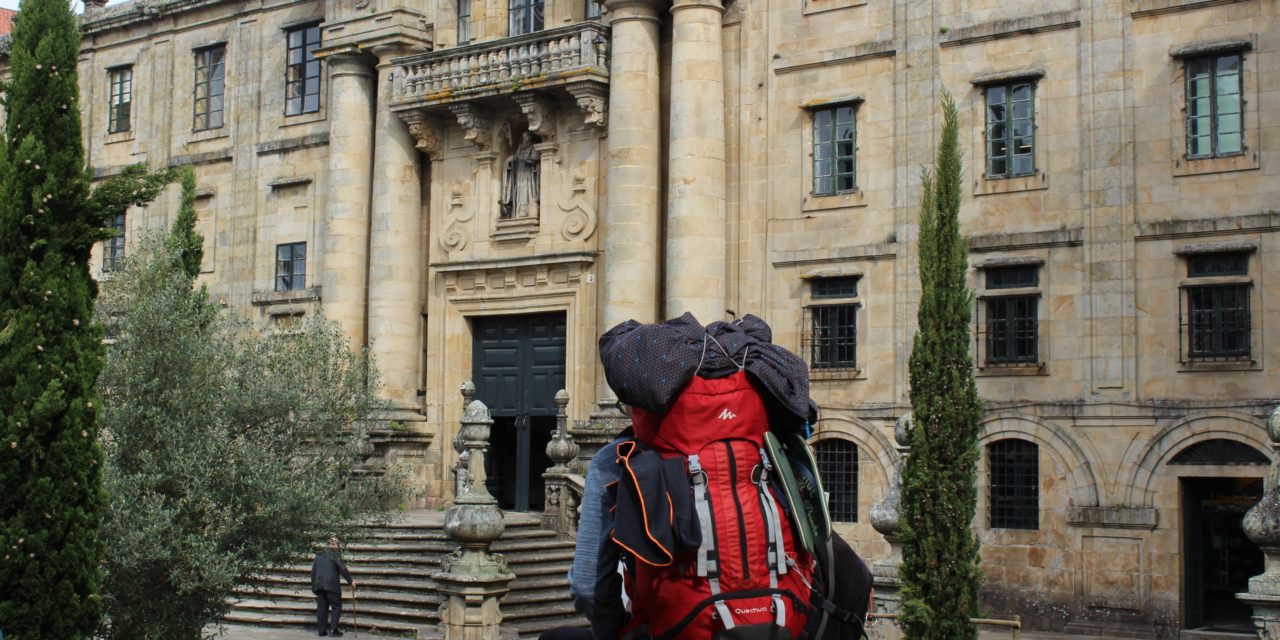 Aaron arrived in Santiago with his friend Michael, the two having just walked together from Astorga. They met in a congress concerning Spanish national exams, a congress in which between two and three thousand teachers meet. They became friends immediately. The two played music and both had the experience of having done the Camino in the nineties. That was what brought them together: the music, the Camino, their desire to have fun.

He made his first Camino in 1998. In the early nineties he had seen a documentary on public television with his father and the idea of doing it took seed, although it took him a long time  to get round to do it. In the end he decided to do the Camino with his father and do it as his graduation present. He had graduated and was going to stay that year working in England – where he was born – and he and his father decided that before he went to England they would do the Camino together.

When the time came to set off, his father was not well, he had recently undergone an operation and his physical condition was not good. Anyway, they went ahead and did it. They had got as far as Pamplona when, finally, they realized that his father could not go on. So, his father left and he decided to continue his Camino alone from Pamplona.

But the loneliness lasted very little. He had been walking for barely two hours when he met a man, he remembers that he was smoking a cigarette when he found him, and they did not separate, they walked together to Santiago. It was 1998 when he met this man, Carlos, from Ourense, and they are still friends today. At that time Carlos became a kind of guide, because  it was not the first time he had done the Way and he already knew many things.

The first experience of the Way bore much fruit : to begin with, there was the relationship with Carlos which gave him the feeling of having lived something very different, of joining a kind of brotherhood, with a shared aim, a certain sense of living with people outside of the social norms. He well remembers that they spoke together non-stop, during the whole time they were on the Way.

Aaron thinks that this is a fundamental aspect of the Camino de Santiago: people open up more on the Camino. This is partly because there are many people who decide to do the Camino in times of crisis, in moments when they are more than usually open, and that attitude of openness has become a characteristic of the Way.

This recent Camino from Astorga was not the first time he has accompanied Michael. In 2014 he had a very special experience: they traveled the Camino together from Le Puy to Santiago with a third person, playing and singing, driving some stretches and walking some stretches. The idea was, above all, to play music and sing. It was fantastic.

Aaron has many projects connected his Caminos. From his trip to Le Puy, which continued on from Santiago as far as Fisterra, he has made videos. Later he came up with a project of interviewing pilgrims, starting with himself, and now he is thinking of making a documentary. On his 2014 trip he had already started interviewing people, he wanted to do something new, he likes to do new things, but it was for this 2018 Way that he developed an interview format with 3 questions in a certain order and started filming the results. His projects around the Camino constitute a preparation for him, but they are also a way of prolonging it, because now he has to think about what to do with the film, how to mount it etc. … They are projects that prolong his Way, which allow him to stay connected with the experience of the Way.