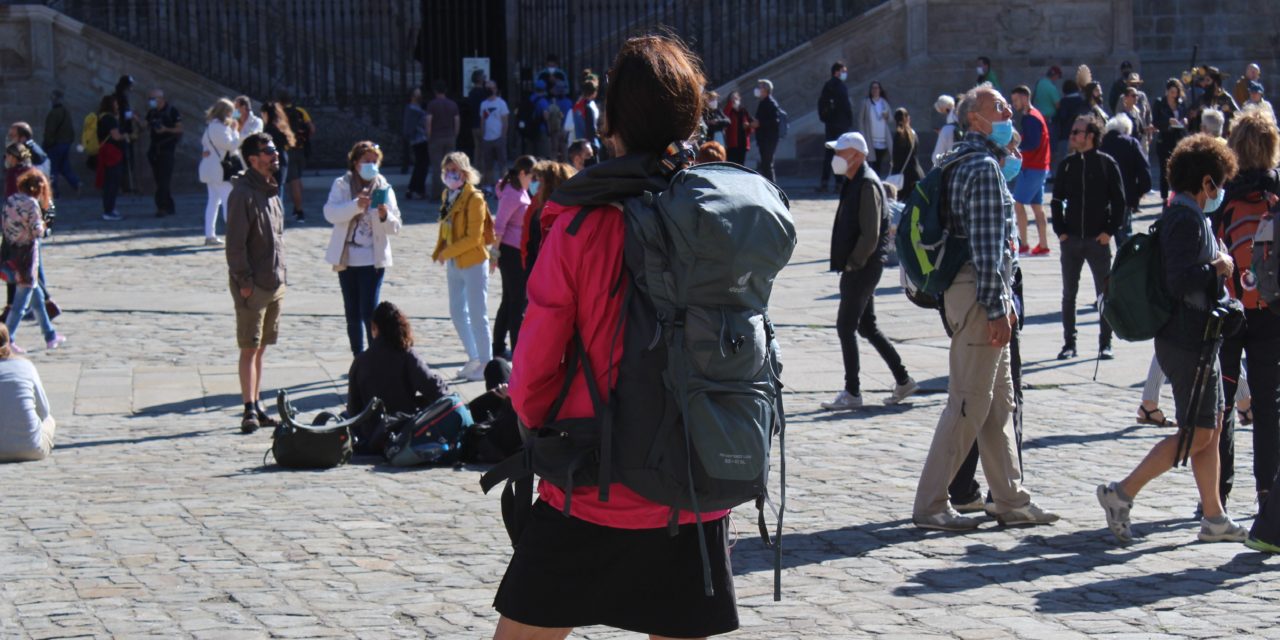 I am 81 years old. I retired in 2002 and cared for my sick mother until 2004. In 2006 I decided to take my 15-year-old great-niece to do a seminar in O Grove and, from there, one weekend we went to visit Santiago. At the Obradoiro we saw the emotion of the arriving pilgrims and we both said we wanted to know that feeling. It was the month of July and in August we did the Camino from Tui. We did not think anything of it. We went to Decathlon, we bought the backpacks, we went to Tui and we went for a walk! Neither of us had ever walked, not even 5 or 10 kilometers, but we had no problems and we enjoyed ourselves in a very special way. And the arrival at the Obradoiro … you can’t even imagine how we wept!

Two years later I took that girl’s little brother to do the English Way with me from Ferrol, she was 10 years old. After that experience, when she returned to her Marist school in Valencia, she suggested to her teachers that they should do the Camino. One of them asked him how he came up with the idea … but finally the following year they did it from Ourense to Santiago.

In 2007 I decided to do the Camino from Roncesvalles, in May, coinciding with my birthday. I did not finish that Camino, a friend came with me who left it in Pamplona, ​​I continued to Carrión, but there I caught a very bad cold with a high fever and I had to go home. But in mid-June I took it up again and finished it, and then continued to travel the Camino frequently, starting and finishing it from many different places, the last five times from SJPDP.

Now I have a torn meniscus, so this year I walked less. It happened to me in 2014 on the Camino and as a consequence I was bad for some years, so now I could only do short stages, my meniscus decides how much I can walk: one day 20 kilometers, another 10 or 5 and the next 25. But between Arzua and Santiago the desire to get to Santiago wins and, sometimes, I leave at 6:30 and when I get to Pedrouzo it can be 11:30 or 12 and, after a beer, I can’t stop and I get to Santiago. My meniscus problem cannot be fixed, but I do not give up, I agree to make these short walks. The truth is that when I go to the doctor’s I wear an arrow from the Camino and, if the doctor knows the world of the Camino, he helps me more. I move slowly so I can keep walking longer.

I am not the same as before the Camino. I worked for 42 years in Iberia, I traveled everywhere by plane and after my retirement, with a good pension, I lived very well with friends, theaters, museums … But since I discovered the Camino my whole life has changed. No more planes, but the Camino, boots and backpacks. I even added a new circle of friends, because on the Camino there is a different language, the smile and the gesture, there are no limits, and from such an experience my new friends arose, very different from the previous ones. It is completely different from my previous life.

In 2008 or 2009 I also started working as a hospitalera. Each hostel is different, the hostel depends a bit on the hospitaleras and the atmosphere that is generated by them. I have repeated this same experience in many hostels: Viana, Bercianos, Tardajos, Carrión… I was also once on the Camino de Madrid. As a hospitalera, you learn many things, for example, not to have prejudices, because everyone, even if we don’t want them, has prejudices.

Entering the world of hospitaleros is very hard, but, as I was saying, you learn a lot and also live very intense moments. I have thousands of stories, I have heard thousands of stories in the shelters. You hear very harsh things, terrible stories, human dramas … but also other happy and funny stories.

The Camino is another dimension, one becomes uninhibited, we are all dressed the same, there are no races, no differences. The Way is a parallel dimension. Unfortunately, I have experienced approaching a person who is suffering or crying in a city like Madrid and offering my help, and getting the answer: “What do you care?” On the Camino something like this is impossible, that does not happen.

The Camino is also a way to feel better, I remember when a cousin died who was like a sister to me, after spending months with her and feeling still bad, I left Madrid and came to Santiago and Finisterre. I felt better.

My intention is to continue walking and working as a hospitalera. In August I will be first in Tardajos and at the end in Carrión de los Condes. As long as I am in the condition to do it, I will continue, I do not want to be a hospitable visitor, I want to be 100%. You get up at 6 in the morning, leave the bright bathrooms … and offer the attention you want to give to the pilgrims. It’s hard work, but I want to do it like that- 100%. I prefer one week like that to spending fifteen days in another way.