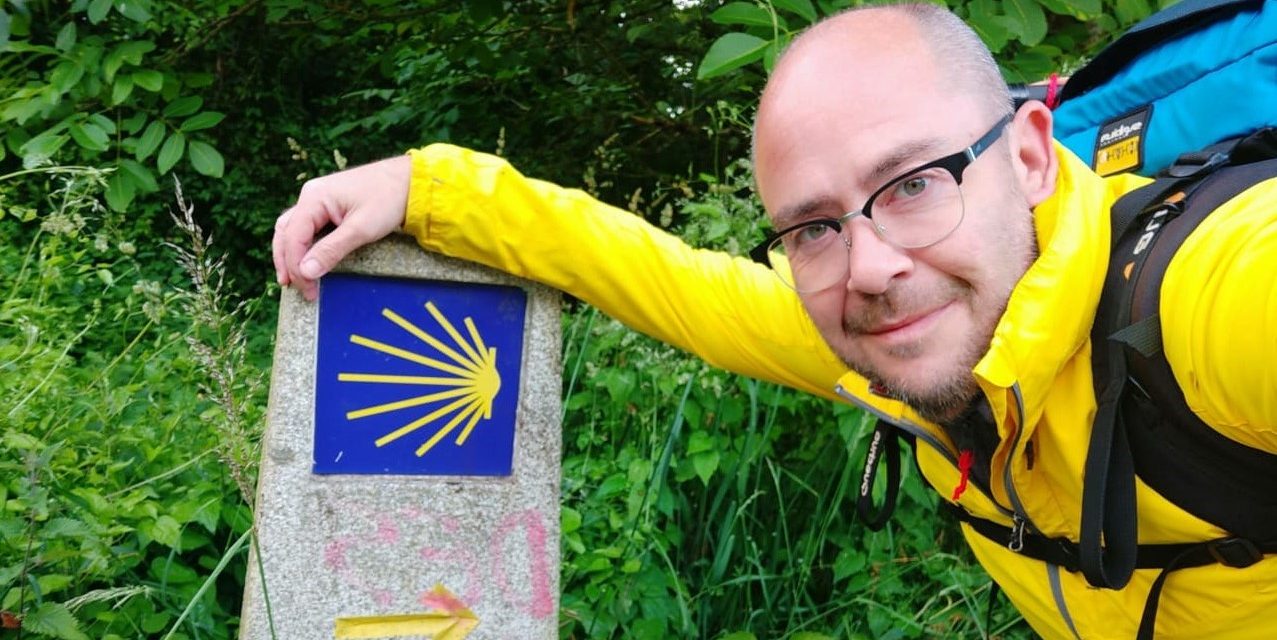 Lorenzo Merín is one of those pilgrims for whom the Camino has changed life, someone who never tires of saying that the pilgrimage to Santiago is the best therapy, because he knows full well what that means. In addition, he is a pilgrim who, through what he considers the most gratifying work, has learned to respect all forms of pilgrimage, and to lose his prejudice towards those who cannot face the Camino alone or in any other condition.

Lorenzo has just completed the last 100 kilometers of the Primitive Way, he travelled it alone and as such he has become the first post-Covid pilgrim. He tells me that he believes that a family arrived before him through the English Way, perhaps it is true, but in any case, what we do know for sure is that he just picked up a Compostela after walking the traditional way for several days.

-Lorenzo, to start with: Could you tell us a bit about how your relationship with the Camino began?

I am from Albacete, La Mancha, and in 1993 I participated in an initiative organized by the Junta de Castilla-La Mancha: a group of at least 50 young people. At that time I was 18 years old, it was a very cheap trip, they took us to O Cebreiro and we walked from there. We had permission to camp next to the public shelters and use the showers, and in return we helped in the kitchen. It was a fantastic experience. I remember that on the first day, in O Cebreiro, I suffered my first spiritual “pájara”. After a religious education in my childhood, I had become almost an atheist, but it was there I had a first encounter with the spiritual. I would say that my spiritual relationship with the Camino is that it always puts me in doubt about atheism.

The relationship I have today with the Camino goes beyond what I experienced that first time. You see, I usually refer to the Camino as a “mobile psychiatric hospital”, because I think that somehow everyone goes to the Camino with their own problems. You don’t know why you are going, but then you discover it later. In my case, this dimension is fundamental: I have returned to the Camino in times of crisis, difficulties, and the Camino has always been my best therapy.

-After that first youthful pilgrimage, when did you meet the Camino again?

On my return from Santiago I started my studies, I studied tourism and at only 21 years old I got my first job. It was not satisfactory and, after a few years, I ended up leaving it. It was 1998 and I decided it was a good time to do the Camino. I took the money I had left and I went to SJPDP, there I met my best friend, Carlos, a brother, a Brazilian, godfather to my son. I have been 20 times to Brazil, and he has been here … After that Camino I started working in travel agencies, but every year I took vacations and went on the Camino, especially on the French Way. At that time, I was fat, becoming obese, there was the Way that I almost had to abandon, it was a defeat.

At a certain point, after my mother died, I decided to take care of myself. I quit my job and had an operation to reduce my weight. It was 2008 and, still recovering, I returned to SJPDP. Since then I have walked the Camino every year. A year later, in November 2009, when I arrived in Compostela where I stayed up very late. I was with a stranger who wanted to go on, I drank a lot and, before I realized it, I was talking to someone who today is my wife and the mother of my son! Yes, I met a Galician from Fene and in six months I was living in Galicia.

-If that’s an important change, you found your wife and you came to Galicia …

Yes, I came to live here. At first, I was doing jobs that I did not like and, as always, I left them and went on the Camino. On one of those occasions I saw a tour guide working on the Camino, I asked for his card and I wrote to him… and I ended up working with him! Now I work as a tour guide on the Camino, with small groups, especially foreign and older pilgrims, people who do not dare to walk alone in Spain on their first experience, or who simply cannot do it due to their physical conditions. It’s amazing !, I get paid for my passion!

What I like most about my work are the stories, I listen to incredible life stories, on all roads there are incredible stories … And I make friends, we meet and we reflect on life at night. In addition, it is gratifying to know that many of them, after this experience, return alone or with friends and family to do the Camino by themselves.

Thanks to this experience I have stopped judging, I think it is important not to judge people on the Camino, to accept that there are as many paths as there are pilgrims and that everyone’s option is always to be respected. We find it difficult to imagine the experience of walking in an unknown country, perhaps on another continent, without knowing the language, without previous experiences, with a certain age or physical condition … The Camino should not be a place to judge others.

-You have travelled many ways, not only French Way, and also in many different ways …

Yes, for example, I did the Camino with my son when he was two and a half years old, we only did 100 kilometers, but it was incredible. On the other hand, working on the Camino I sometimes do very long paths, of months, in Portugal, France, through Spain from Andalusia … But I always keep my own personal paths, “my backpack trail”. This year I was able to go to the Winter Trail in February and I have a long list of more unknown trails waiting for me… I really enjoy those experiences.

-We now come to this last Camino, to this extraordinary experience of walking the Camino as soon as the conditions allowed it: Why this desire to do the Camino just as soon as it was  possible?

My experience has been that of millions of people in recent months. I live in a flat without a terrace, without a balcony … And there I spent these months locked up, under the pressure of continuous bad news, on TV, in the media in general, listening to how the death toll was increasing, not knowing when this period would end . At that time I thought about it and told my wife: “the first day I can do the Camino, I’ll do it.” First, I thought about doing the English Way, but then I waited until it was permitted to travel between provinces … so that the Primitive could be my option. I made a Camino with “sentidiño” and what do you want me to say: There is no healthier or more human activity than this! El Camino is a place where you can be human for a while and that is the best therapy after the drama we have experienced.

-The pilgrims who read this interview will be very interested in the practical side of your Camino, how you prepared it and made it possible, what you found …

To make it possible, the fundamental thing was to get accommodation, because at that time it was still not possible to travel without having a good reason. When I started you could go to another city, but you had to have a reason and a place to stay upon arrival. Since I know the Primitivo well, I thought of several places I know between Lugo and Santiago, places where I wanted to sleep: I chose the accommodations and then I was able to leave. But this was my case, from day 21 there will be no more problems.

I clarify here, yes, I think that I was not the first pilgrim, a family from Ferrol arrived earlier, although I think they slept in the homes of friends and family and not in shelters. I tried to use hostels or accommodations more linked to the Camino and the truth is that I succeeded, at the end of each day I was met with the usual welcome. I did not feel fear or anything like that. On the Camino there is all the social distancing you could want, and I took all the necessary precautions: mask, gels …

-Did you find the necessary hostel accomodation?

Yes, in general I had no problems, although compared to any previous Camino -even though I have walked a lot in winter- this short pilgrimage was very lonely, with almost everything closed … At one stage it was difficult to find where to buy water, you could not as in the past resort to the people in the villages … or maybe yes … On my camino I found two opposite reactions: sometimes they were very happy to see you and others were afraid.

I was very guided by the information on accommodation in Gronze. Some of the hostels and rural houses were open, many of them were helping and housing people throughout the confinement, people who worked in basic services. In these accommodations I felt very safe, I saw that people were applying all the regulations. I slept two nights in a room and one in a hostel, in the hostel they gave me all the facilities, they have adapted superbly. They are all adjusting and looking forward to being able to work again.

-To finish, I would like a more personal reflection: What did you feel on this Camino? What did you think or feel while walking?

I felt happy, little by little I felt how a kind of prison feeling that I had disappeared, I felt free walking through the mountains! But at the same time it was all very strange, because I was just walking, without a minute of conversation. In this sense the accommodations were very important, I felt very good when I got to the places where I slept, I even made friends, I think I  created a friendship in every place where I slept.

Something I want to point out and it caught my attention is that the Camino was very clean, it shows that we have not messed it up for a long time, there is something to learn from this.

And then, on the last morning, before setting out to a walk I was very excited, I cried endlessly before leaving … Then in Santiago I was also a little excited, but strangely it was not the same, I was more excited when I left in the morning knowing that I would arrive at the goal. Why? I remembered my beginnings on the Camino, I remembered, for example, when the townspeople who gave you water or directions, asked you to think about them in return: “Remember me when you get to Santiago!” I remembered all those people and all the people that I have met later on the Camino.

It has been a lonely Camino, but with the usual warm welcome, and it is the best therapy after what we have been through!