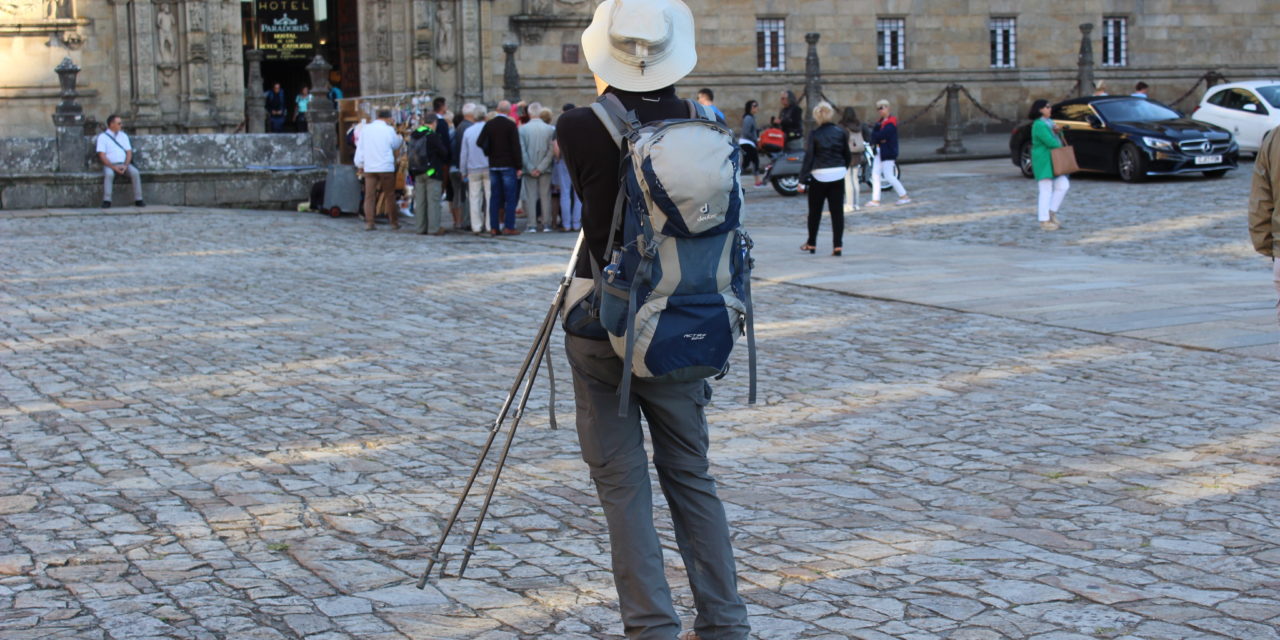 She learned of the Camino only two years ago. Things had happened in her life that lead her to the Camino. Many life events occurred in a short period of time. Retiring, caring and death of her mother, six months later also her father pasted away. During this period of time, her husband’s work led them to leave the city where they had lived for 20 years, and they went to live in Las Cruces.

Already in Las Cruces she took care of her sick father-in-law. He was a veteran of World War II and she, aware of the importance of honoring veterans, participated in a memorial event which participants walked 26.2 miles. At the event she met people who introduced her to a hiking group in Las Cruces, and among them was her friend Annie who invited her to do the Camino. She, alone, did not dare because she had never travelled, she had never left the country, she felt incapable; but when her friend announced last fall that she would do it, she decided that she would too and began walking in preparation for the event. Her husband supported her, in her idea and later would join her in Santiago after completing the Camino.

She loves to walk, hiking connects her with nature and she thought that the Camino would also put her in touch with her inner world, which would be a good experience to reflect on. She is a religious and a sister of hers had also made a religious pilgrimage (Fatima). She wanted her pilgrimage to have that aspect: devoting part of the day to prayer and meditation, even bringing petitions for her family. But above all she wanted to give thanks- thanks for the life she had lived and had, she wanted to give thanks for her life.

The importance of this aspect of gratitude was revealed to her on the Way, but also other reasons. In one village, a priest asked the group of pilgrims with whom she participated in the mass “why did you come?”, She replied “out of gratitude”, but the priest told her that he did not think it was just for that, “it’s not only that, “and at that time she replied that she had lost a child in 2002. She thought of her son on the Camino, prayed for him and the Way helped her to celebrate his life, but also with regard to her son this had been the central aspect of her experience. She felt grateful for the relationship she had had with him and for the good life he had lived.

For her, her experience of the Way had a spiritual side. Also there were memories and memories have had a great importance, and they have appeared again and again on her Way. For example, the smells that she smelt on the Camino often brought her back to her youth, and the song of the birds, memories of many kinds … memories and sensations that came to her and always made her feel grateful.

She came from the United States with other people and planned to walk with her friend. They flew to Paris and from there to Biarritz, where they encountered transport problems in reaching their starting point of Saint-Jean-Pie-de-Port. They realized that it was best to take a taxi and there they found four complete strangers ready to share a taxi with them: two Australian pilgrims and two Irish pilgrims. For her this beginning was already a novelty, she was not used to trusting strangers, but on the Camino it is normal to do so. She remembers a woman she met on the Camino and told her that she walked alone and got lost many times but that she always found someone to guide her, including people driving her to her destination. On the Camino you can trust others, you learn to be trusting. They tell you stories that give you constant assurance: pilgrims who forget their hiking sticks in a pharmacy and others, locals or pilgrims, who offer to call and locate them, go and look for them, etc.

She is not yet aware of what and how many will be the consequences of her Camino, but she already knows that, for example, she has lost her fear of travelling and also that she has lived through a great experience, having found people from all over: South Africa, Korea, Iceland …

She believes that for someone of her age, already retired, the Camino is a perfect place to start living that way. She remembers some friends and acquaintances who travelled alone at the age of twenty, and she envied them but she was not able to do it then. She would have wanted to do it but only now and through this experience has she finally been able to fulfill that desire. Remember that on the Camino she met an 18-year-old girl who walked alone and, one night, arrived at the shelter too late and could not get in, she slept alone outside, when she heard her she thought: that’s courage! Now she knows that she would also have it and that she could return alone to the Camino, without fear.

She believes that the pilgrim associations are important, she contacted American Pilgrims to get her credential and it was important for her to participate in their social networks, get practical information but also see that she was not the only person who felt anxious.

At this moment, rather than going back to the Camino, she believes that she would like to be “hospitalera”. As to what she has obtained, she believes that above all she has found strength, physical strength and courage, and she has discovered that she has it. She has learned not to be afraid of the unknown. You do not know where you will sleep or eat and you are not afraid. That has been her great lesson:  be not afraid. 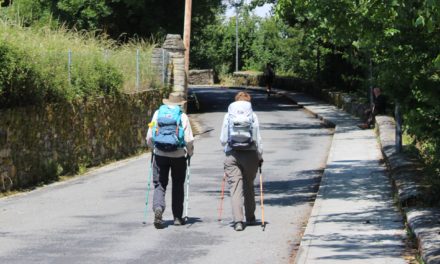