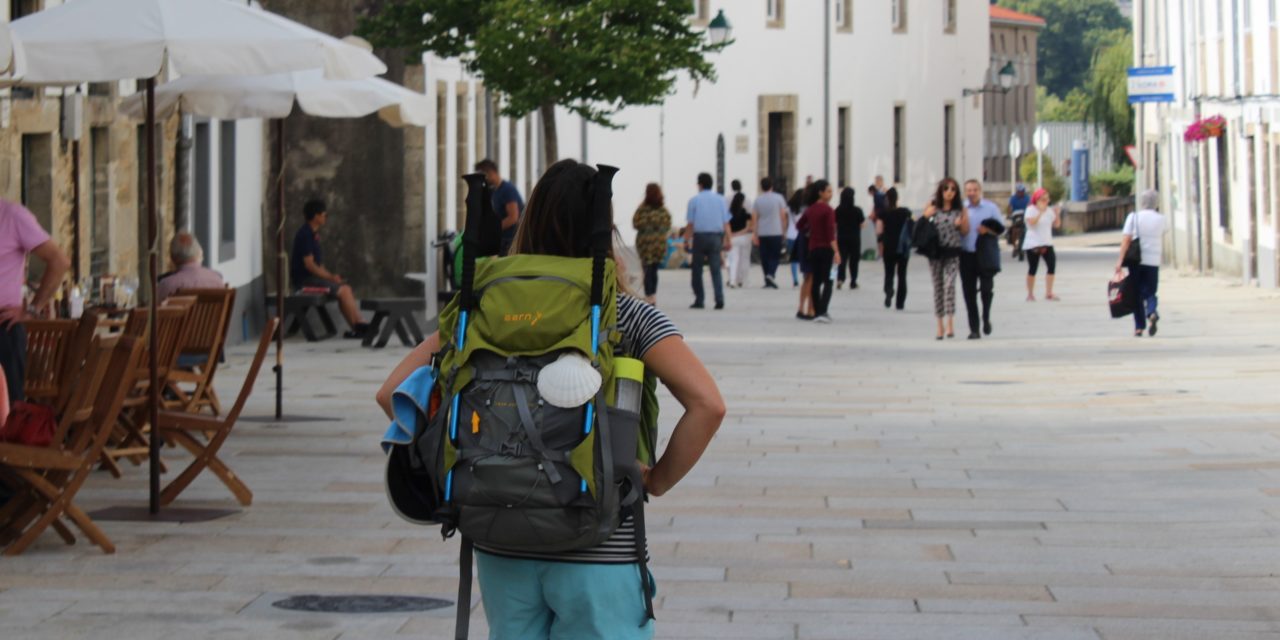 She did not know anything about the Camino. She and her husband had lived in Germany for a while, where they returned for the teachers’ retirement pension which was due to her husband for having worked there. They travelled to Madrid, where they rented a car to go to Germany and it was on that trip that they had their first contact with the Camino.

She had heard that there was a large monastery in Silos, a monastery that was then – in 1991 – famous for Gregorian chant. They decided to visit it and when they got there and attended the Sung Mass they met 24 monks and 7 pilgrims. The presence of these pilgrims led them to ask questions and search for information, the Camino de Santiago was the answer and, in the library of the monastery they not only found a modern guide to the itinerary, but also a medieval one ! It was the Calixtino Codex. She was very attracted to everything, but she simply thought that if she had been younger she would have done the Camino, without seeing it as a real possibility for her now. She saw it as being something for young people. Only later, while in a hairdressing salon, did she meet a very old pilgrim, over 70 years old, who told her story. That changed her ideas, and thus she decided he wanted to do the Camino.

It was in 2002 when she decided to do the Camino for the first time. At first, she planned it alone, read many things and made preparations … but in the end her husband joined her and they did it together in 2003. He is a vascular surgeon and she was a neurologist, they had jobs with many responsibilities, children, they never had time to be alone: ​​the Camino was for them a way to reconnect and have time for themselves.

Clinete recognizes that until then she had prejudices towards Spain, with many clichés taken from the darkest aspects of its history, but the Camino reconciled her to Spain and allowed her to really discover it.

Fundamentally what she found on the Camino was the possibility of becoming a better person. On the Camino you have a lot of time to meditate and look inside yourself, and sometimes to fix things that are not going well. For example: she had a managerial position, she was a boss, and in this rôle she was rigid, demanding, with a certain hardness, all of which tended to make  her see life in the light of obligations. On the Camino she began to change. She stopped being so hard, she became sweeter, softer and she felt grateful for everything that happened to her.

She believes that when you undertake a long journey, from as far away as France or other similar distances, you have a lot of time to change and come to an understand certain things. Thus when you return to your world you are the better for it. You learn to listen, to see, to feel what surrounds you, you become more patient and it costs you less to ask for forgiveness. She believes that also people who start as tourists or for sport end up becoming pilgrims.

Her experience is close to something that was said by a well-known Franciscan writer in Brazil, Frei Betto.  In one of his books he affirms that man was made for paradise and his life is really a walk towards Paradise. For Clinete the Way of Santiago symbolizes such a journey very well. On the Camino you forget your mobile, nobody calls you for an emergency, you eat when you are hungry and you rest when you feel tired and nature enters inside you, so that it is, indeed, as if you were walking towards Paradise, leaving behind you little by little all the things that don’t work and changing. That is why, when she feels stressed and with little patience, she knows that it is best to return to the Camino, a pause for relaxation that allows her to see once again that the meaning of life is different.

Not everything you find on the Camino remains when you return home, but many things do remain with you and change your life. In his case, her life has changed profoundly. She insisted on working with a pilgrims Association and on founding a Brotherhood, she began to read and study the Camino, she has created an important personal library about the Camino in Brazil,  she helped to develop Spanish courses for foreigners in Santiago linked to the Camino… She has even been approached as a neurologist on the subject of witchcraft in the past in Spain.

The Camino ended by turning her into a pilgrim, hospitable and studious of the pilgrimages to Santiago.

This year she will walk the Camino Inglés, it will be her Camino number 15. She comes to Santiago and the Camino every year, sometimes more than one, the only one that she has not yet travelled is Primitivo, but she hopes to do it soon.

Currently, together with her husband, she is the life and soul of an important Brotherhood of the Apostle Santiago, from which they try to bring others to the Camino, they have even created a virtual magazine to do it. This Brotherhood helps to prepare the Way for future pilgrims from Brazil and offers them the possibility of participating in a ritual of departure, like the medieval ones that are collected in the Codex Calixtino.