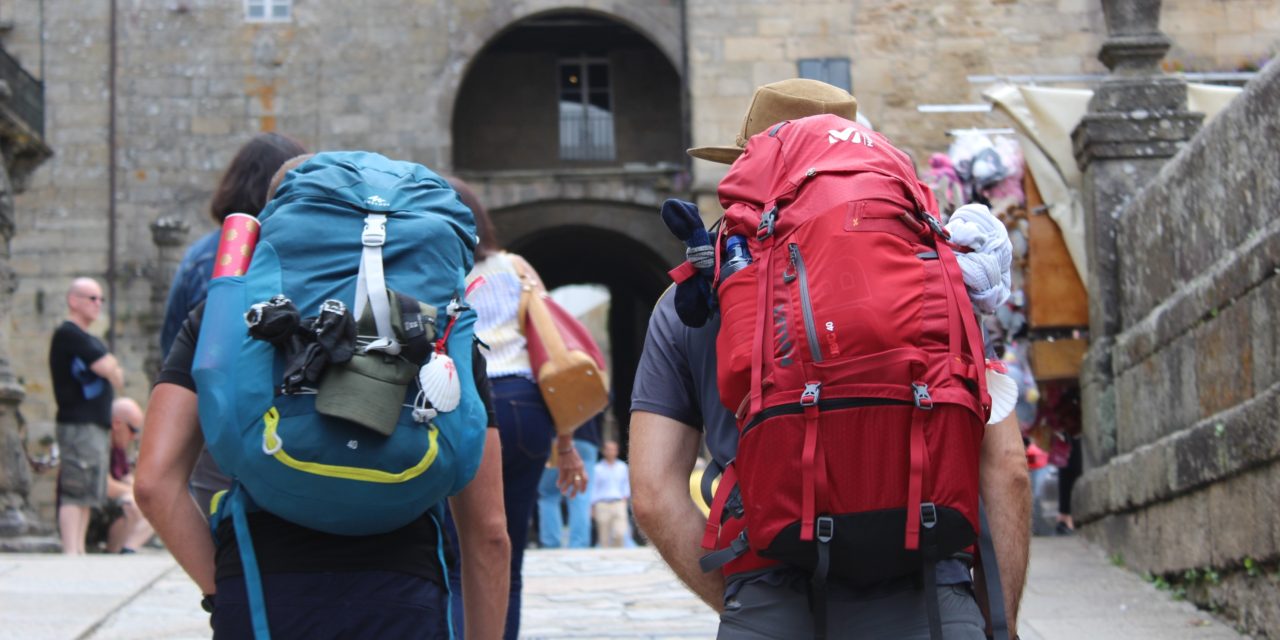 Mark and Jeanette remember that their first encounter with the Camino was they were at a family reunion and one of Jeanette’s cousins was talking about a pilgrimage walk that she had gone on with a friend. At that time they did not know anything about pilgrimage walks but later, when they saw the movie ‘The Way’, they understood and began to be interested in the Camino. Then Jeanette wrote to her cousin who had spoken about the pilgrimage and asked her if she was referring to the Camino. The answer was yes, and she also provided a lot of really good information about what to expect, what to pack and how to train to prepare for this walk. It was in the year 2013 and they decided to prepare for their pilgrimage together.

When, Jeanette’s mother fell ill and subsequently passed away the trip had already been booked. So they had very little time for training, physically or mentally but they decided to go anyway. This first Camino in 2014 from Ponferrada actually turned out to be a good way to reflect on the loss of a loved one and appreciate the blessing of having grown up in a loving family.

Having not had much time to prepare they had some doubts about their physical capacities, but decided they wanted to do it on foot. The two of them enjoy cycling, but they hadn’t previously hiked that much in Canada and this was what they wanted to do for their Camino. They wanted to walk and have the necessary time to meet people: pilgrims, locals. Another important aspect was photography.  Mark is enthusiastic about photography and that was and is an important aspect of the Camino: to take lots of photographs.

Well, it was a hard experience, they walked with boots and got terrible blisters. They thought that their problem was their footwear, that’s why they ended up buying new shoes. But these problems were far outweighed by the positive aspects, because for them it was a fascinating experience. Canada is a young country and traveling the Camino was like taking a trip through history, because certainly in Canada you can walk, it is a wonderful place for hiking, but it is not the same thing.

Although their Camino was hard, they returned in 2015 and 2016 to walk new sections. They walked from Burgos in 2015. And although everything went well, they again suffered due to blisters. On this Camino they met a 70-year-old American woman from California, they became close friends and later they went to visit her in California and she along with her husband also visiting them in Canada in 2019. Encounters like this, friendships like this, are one of the great things that emerge from the Way.

In 2017 they returned to the Camino. They traveled the Portuguese Way with the California woman mentioned above and she, in turn invited another friend from California who had walked the full Camino Francés on her own at age 75! Sadly, this new fellow Camino friend died and in the Spring of 2018 so Mark and Jeanette’s 2018 Fall Camino Primitivo was done in her memory. For this walk they started in Oviedo. Compared to other Camino walks they both agreed this was the hardest walk to date, especially because of the lack of services and even one stage where they have to walk more than 30 kilometers without any coffee stops or bathroom stops for the entire section. On the plus side, the beautiful scenery and exceptional views were very well worth the challenge. Along this Camino route, they did not find too many pilgrims, yes, there were some young people, but most of them walked faster than them. One thing about Caminos is that everyone is doing it for different reasons and at their own pace. It’s not a race and perhaps even more beneficial when you take the time to smell the flowers.

For Mark the Way has been an important source of interest in Spain. After his first two pilgrimages he began to learn and study the history of Spain. It fascinates him, its languages, its kingdoms … He believes that it is one of the most important aspects of his relationship with the Camino: he has developed a fascination with history. The other aspect of the Camino that stands out is that of photography: Mark has found extraordinary landscapes for his photographs, especially during the early hours of the day.

On the other hand, for Jeanette it is a place linked to her religious feelings: her father was a Lutheran Pastor and so for her the religious aspect is important. For all her life church attendance has played an important role in her faith journey, but the Camino has really helped to deepen that relationship and belief in our eternal Father and Creator. On the Camino she reflects on her loved ones and each year she brings a stone in memory of someone, a stone that she leaves in a place that seems particularly appropriate. She is also very sensitive to the beauty of nature and the friendship and camaraderie that accompany the whole experience. You do the same Way as others and, in part, with others, but at the same time each one does it for a different reason and lives it in his own way. She remembers meeting pilgrims who were searching for a meaning in their lives: a German man who had sold everything and made one Way after another, a young girl who walked with a dog in a search to find the meaning of her life … Jeanette believes that the Camino is a good place for living through a religious experience.

Jeanette also thinks that there are miracles on the Camino, she thinks that if they get lost someone will always appear and help them to find the Camino again, extraordinary things always happen on the Camino. Some might call that a coincidence but she would argue that the odds of it being an Angel or a miracle are far more plausible. For example, years ago they found a pilgrim who had a donkey and a dog with him, a Russian girl offered to give them their photos then, it took months to do it, but finally the photos were sent; Last year, that girl – who lives in Madrid – rediscovered her e-mail and asked them to meet near the airport, they met one another each other.

On the Way connections of this type are frequent, they are created, you find them, in the Way they happen and you do this kind of thing.

Both Mark and Jeanette say that they have met many people and discovered a great human diversity. They remember, for example, an American, an ex-soldier, who has suggested that he and Mark should walk the Via de la Plata. Mark does not think he will do it but they keep in touch just the same and they talk about it and share ideas. Mark and Jeanette also have the project of walking next year with a former schoolmate of Mark’s, probably at the end of March, when there are not yet too many people on the Camino.

They remember that during their first experience, in 2014, they walked all day and ended up exhausted. Then they did not understand how this country lived, with its rhythm of breaks to eat and take a nap. But now what they love about Spain is precisely the social aspect, the importance of going to dinner together with other pilgrims, just like Spanish families They still eat and talk around the table. They like to make the break to eat, they have seen it in the small nuclei that crosses the Camino, in America time is money and everything is done too fast. However, they believe that in Canada they are a little different from the USA, they have more vacations, work is important but not as much as it is in America.

Mark and Jeanette have a family, live in a traditional way and when their children were young, they could not travel too much beyond short trips to visit with their family. But now that the kids are grown, they have the opportunity to live this new experience. The Camino is an experience of travel that is much more interesting than the accumulation of possessions, with an important human aspect that, as in life, has to do with the others you meet: children, family, friends … not with possessions.

Mark promotes the Camino in Canada, talks to everyone, but knows that it is difficult to explain to someone what that experience is, to transmit it. Jeanette emphasizes: the fact that you carry a weight on your back and feel discomfort in the body and the feeling of letting go of the load at the end of the day, of feeling a release, the pleasure of taking a shower at the end of the day, are incredible experiences that you cannot feel without having lived them.

Mark and Jeanette belong to an association of pilgrims and they know quite a lot of people who come to the Camino, who have done it and will do it again. After seeing ‘The Way’ Jeanette was convinced she wanted to walk the Camino but Mark had doubts. In fact, originally Jeanette ha planned to do the Camino with a girlfriend. But when that plan fell through, Mark decided to come along instead, partly because he thought it would not be safe for Jeanette to be hiking in a foreign country on her own. Now they are really happy to have found this world and have both realized that it is a safe and satisfying experience.

And one last word: we live in Alberta, nature there is incredible, so why do not we stay to walk there? It’s the culture, the culture that we find on the Camino.