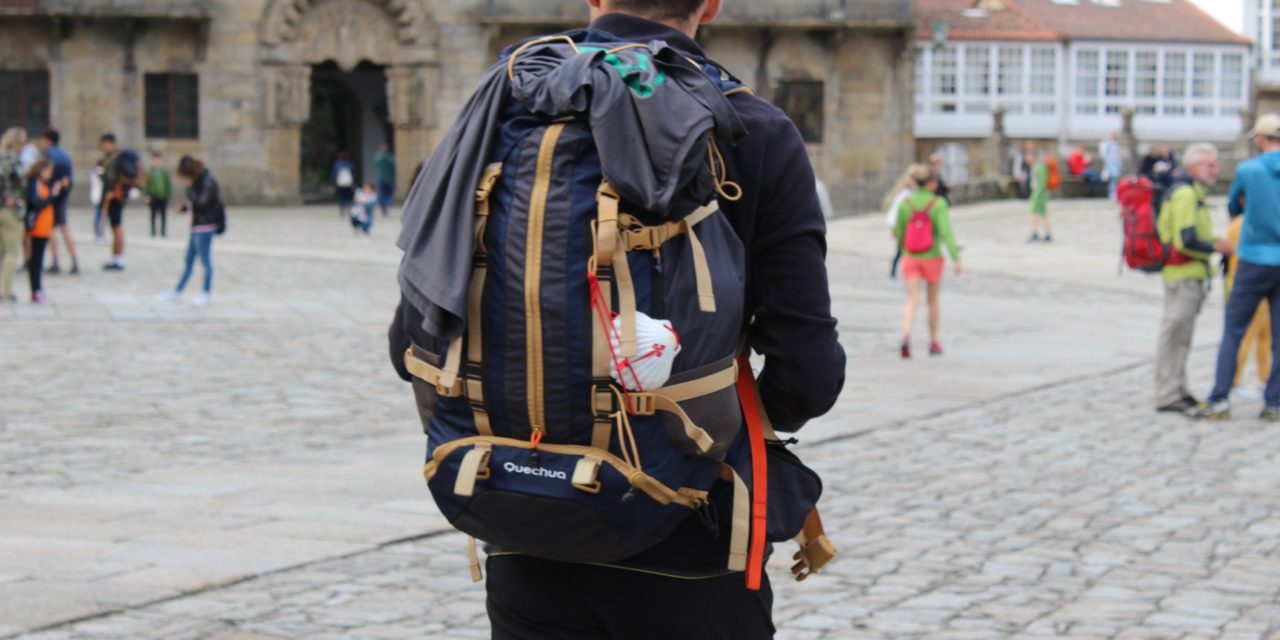 Bycios discovered the Camino de Santiago in the 90s through magazines, especially those with a medieval theme, but also some of the “new age” world, although he was interested in actually doing it. His life went on, in the year 2000 he got married and had children and never thought about the Camino again until many years later.

It was in 2014 when the Camino really burst into his life. A friend from his home town in Sardinia told him he too wanted to do it and so decided they to go together. The two of them did the Camino that same year, starting from Saint-Jean-Pie-de-Port. They left without a return ticket, because they did not see the trip as a vacation but as a challenge, an adventure they did not know if they would be able to.

He used to go for a walks with his dog, but he was not in training, so he did not know what would happen on his Camino. He had talked to some people who had done it, but there was no association in Sardinia and he was not well informed. Of course, he had never heard of anyone having a bad experience, all the pilgrims with whom he had spoken wanted to do it again.

They began the Camino in the month of July, took a month’s vacation and, finally, everything went well. His friend had problems with an ankle, but he did not, so they had to separate quite early on. Thus, almost from the beginning he went on alone, although he always found companions, especially Italians, among them was a priest and a girl from his region and the three of them walked together during the last week. He arrived in Santiago on July 24 and, against all odds, the experience was easy.

What he liked about the Camino was the relationship with the people he met and the feeling of freedom. Then there is the fact of advancing on foot, he likes to travel a lot but never had done it on foot, it was an incredible experience, he studied the route but with another vision and that’s why he did not have the return ticket.

At the end he had three days in Compostela and he was able to continue to Fisterra, he walked one day and then he continued by bus to Muxía and he walked again to Fisterra. That section was magical. He arrived in Muxía with 25 euros and problems with his credit card, but without knowing what he would do, he went to the Arasolis shelter and found that the owner trusted him, let him run on credit and call home to arrange things. He solved his problems and was able to pay and continue calm. He also found a companion of the Camino with whom he had walked from Roncesvalles to Burgos. This person was from Assisi. That hostel seemed magical to him, he believes that the real hostels and hostels are like that, whether or not one has done the Camino.

He returned home with very positive memories of ​​his experience and thinking about when his next Path would be. In his city he met other pilgrims and decided to enter the Italian association, in the Confraternita di San Jacopo in Perugia, which has chapters in many regions of Italy. He became very involved and decided to enter in its chapter of Sardinia.

In 2017 he did the Camino with his daughter. He has four daughters and is separated and, on that occasion, he was able to convince the third one of 16 years to accompany him. The two of them traveled together and walked the Portuguese Way from Porto. That experience created a special bond between him and his daughter. She feels that she can understand what he feels for the Camino, there is a complicity between them. This year he did the English Way from Ferrol, none of these roads has appeared difficult but all have been unforgettable experiences.

Since he became involved in the Confraternita di San Jacopo he has tried to contribute to the recovery of pilgrimage itineraries in his territory, to do research on those pilgrimage routes in Sardinia. There are a dozen churches in Santiago and they have joined them through a Camino, it is not a historic Camino but it allows a very beautiful journey. In Sardinia he has also walked a lot with his daughter, traveling several ways to shrines, pilgrimages on foot that go from one village to another, such as those from San Francesco to Nuoro, Sant’Ignazio da Laconi, San Gavino Porto Torres …

The Way entered his life and he knows that he will never leave it again. He has never found there to be any negative sides to the Camino de Santiago. The only recommendation that he would give to those who have not done it and have doubts, is to gather up the things you will need and leave. He believes that it is easier to do the Way than to talk about it.

In the future he hopes to be a volunteer hospitalero in Spain or in Italy, perhaps in one of the hostels of the Confraternita di San Jacopo in Via Francigena.