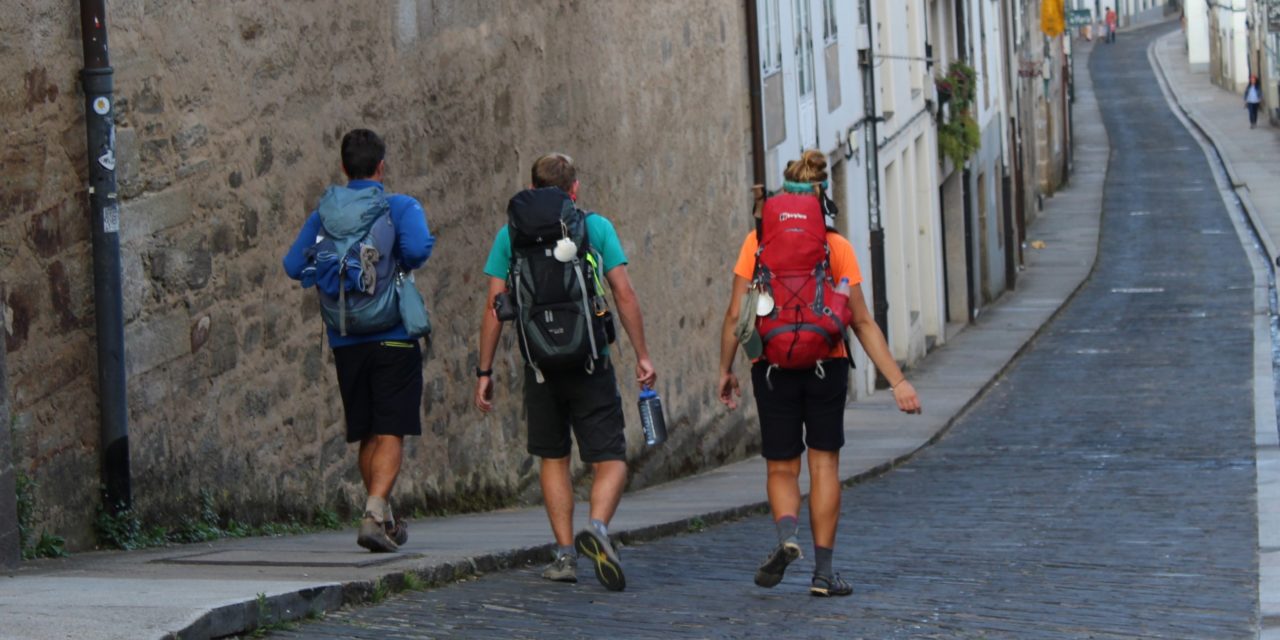 She made her first Camino in 2013. About a year previous to that, she used to work as a volunteer at the Indianapolis Film Festival, and it was there that they screened the movie The Way. In that film she recognized something of herself: a desire for adventure and, in addition, for an adventure in Europe, which she had never visited. It seemed to her that the idea of ​​doing the Camino would combine a number of her wishes and she yearned to go, but she thought it was impossible, having neither the time nor the money to spare, so she set aside the thought.

What had seemed impossible, however, soon began to be less so. Janet is a writer and editor, and knew that one of her author clients was going to take a sabbatical year off to live and write in Ireland. This person invited Janet to visit her as payment for editing, and she decided to do so to be able to visit Ireland. It was after that decision that she realized how close she would be to the Camino. That is the moment when she began to think seriously that she would be able to do the Camino, so she realized that she needed extra money and began looking for a way to get it. As fate would have it, she was called for an interview and got a three-month contract with a successful computer company. They paid well and with that money she could do the Camino.

The building she worked in during those months was huge and the work she had to do could be done in a shorter time than that scheduled. Therefore, she began to use this time to prepare her Way, not only with research on the computer, but also physically. Walking up and down in that immense building and going up and down the stairs without pausing provided good training for the Camino.

What she had thought when she saw the movie The Way was that she had never had an adventure, and this thought led her to become independent, to realize she could do big things and conquer fears.

She began her first Camino in the month of May, in Saint-Jean-Pied-de-Port, and at the beginning it was snowing. She decided to start it there because something inside told her that she had to go through the experience completely. She did not want to set limits and start shortening it. Somehow, she thought that she did not want to limit herself. She wanted a total, unlimited experience, because she realized that even though she was independent in her job her whole life had been confined within limits that existed in her mind.

Janet says she had experienced miracles along the Camino. From the beginning it seemed like a metaphor for life: you walk, you find people and different situations, and you go forward, all going the same way, alone and yet not alone. She made friends, and a very important one in particular, someone with whom she is still very close. It developed along the Camino, although they separated and met again numerous times on the Camino. He is German and at the time of this account they still maintain a deep friendship. She has gone to visit him in Germany after completing her second Camino.

On the Camino she felt all kinds of things, also sadness and loneliness, but they are easily overcome because you see others the same as you, and you also realize that emotions come and go.

At first, she was afraid to sleep in shelters, with so many people around. Sometimes, before she left for the Camino, she would wake up fearful in the middle of the night, thinking that she could not do it—the fear of the unknown sometimes paralyzed her. Also the rain on the Camino worried her. In the end she lost her fear or, better, realized that in reality what she thought scared her she actually liked, including the hostels. She enjoyed all the changes of weather too. Everything that presented a challenge she loved.  And, above all, she loved to live in a random, haphazard way—by not knowing what is going to happen, everything can be possible, and the not knowing is fun.

The end of her first Camino was a bit sad because she had to separate from her friend, and she says that she did not want it to end. But she decided to walk some more, to Finisterre. She also visited Porto and finished up walking some of the way back to Santiago. But after her friend had left, she didn’t enjoy the adventure as much anymore.

When she returned to the United States, she began to desire to face the things that scared her and to live more adventurously. For example, speaking in public had been something that frightened her before. She took on the challenge of public speaking in America and ended up discovering that she liked doing it, and when she dared to look at the audience she saw that they were interested and excited. She began to collaborate with a company, giving talks about the Camino in her country. She continues to give talks for XXX, a company which sells sports goods for trekking and they have invited her to give lectures about the Camino.

Now she has just completed her second Way. It started when a friend who did not dare do it alone, asked Janet to accompany her and she accepted. The experience was difficult and they ended up separating after 3 weeks. Her friend was too dependent. They separated in Rabanal, from where Janet continued alone. Walking with someone who was always checking, reserving, planning … imposed a routine on her and took her away from the Camino. For this reason, she believes that this time her Way really started in Rabanal. It was a very strange Way.

She also spent two weeks as a ‘hospitalera’ in Grañón, and would like to do it more in the future. She wants to write about the Camino and give some lectures. In fact, she is writing a book, one that touches on the supernatural in her life but also her Way. She also draws and wants to illustrate it with her drawings.

Since she began to follow her desire to do the Way, all her wishes seem to have come true. She has given up her apartment and when she returns to the States she will go to a friend’s house and also visit her mother and complete creative projects there. Her mother is 93 years old and she would like to talk to her and write about her. She also completed her first coloring book for adults, which she sells on Amazon and on her own website that she built herself. Before, all these undertakings seemed impossible, now she is doing them.