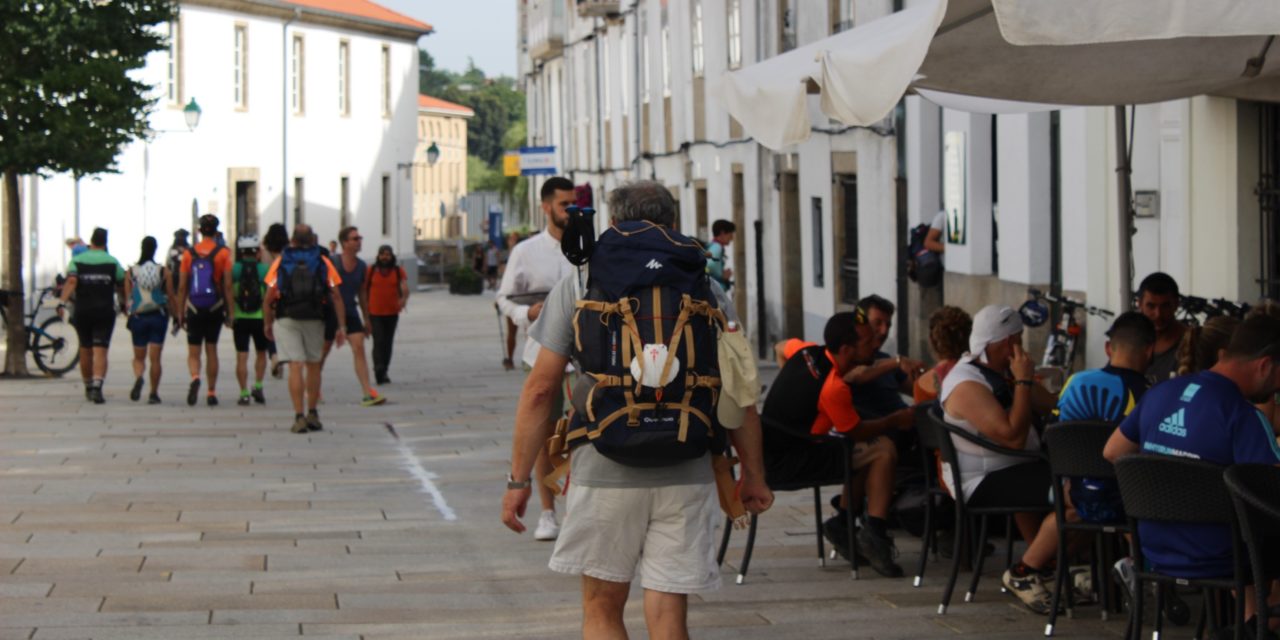 His first Camino was when he was 56 years old, the age at which he could retire. “I wanted to do something new and to take my mind off this moment of great change in my life. I had worked for 40 years in the same job and at that moment I wanted to try to do something different.” He knew of the existence of the Way because he had heard a friend talk about his experience, also something on television, so he finally began to gather information.

He started his Camino in Saint-Jean-Pied-de-Port, where he arrived with a return ticket. On that Road, everything was very well organized, but finally, instead of the 30 days programmed, it ended very quickly. He liked everything about that experience but at the same time he believes that it was too fast, that he did not enjoy it with the calm relaxation of other, later experiences. From that first experience he remembers his enthusiasm, he enjoyed it a lot especially until Leon, a stretch in which he found it easy to socialize.

It was summer, the end of August. He very much liked the experience, he felt free, he could decide everything himself- when to walk, when and where to stop … with a guide downloaded from the network as his only support [www.pellegrinibelluno.it]. Already on that first Camino he ended up by not making many plans and stopping there where he liked what he found : cities such as Burgos or Leon, where there were many things to visit. That experience led to him to finding his own way of pilgrimage: to do it at his own pace, without criticizing or judging anyone, whether the others walk or not, whether they carry their backpacks or not … He followed his own rhythm and finally arrived in Santiago five days ahead of the schedule he had planned, where he waited for the arrival of his wife, as had been previously agreed.

The following year he organized a return to the Camino. This time with another Italian from Emilia Romagna whom I had met on the Camino. The two decided to travel the North Way from Irún. They started off walking very fast as they had done before, but soon began to wonder why they were hurrying and began to walk more slowly: “I wanted to “saporare” (taste) the Camino to Santiago. That Road was a great pleasure and, specifically, I remember a place: Miraz.

Owing to a small health problem he could not walk the following year, but in 2016, when he returned to make a pilgrimage with his friend from Emilia Romagna, this time in Italy: Via Francigena. They traveled throughout the Italian territory, from the Great San Bernardo. Of places and memories Val Promaro stands out, and the a very beautiful hospital just outside Luca, and then the arrival in Rome that is very beautiful, with its the descent from Monte Mario overlooking the Vatican.

The experience had differences and similarities with the Camino de Santiago, in particular remember that there were far fewer people and that almost all were Italians, but also there were also some foreigners, for example Spaniards. Among those whom he remembers one was called Jesus.

Last year he travelled the Portuguese Way. They followed the Central Way from Lisbon, deviating to Fatima and to visit Coimbra, and then, from Porto, they took the Camino de la Costa to Vigo. He also liked this experience, the sea, the landscape and Portugal and he remembers good food : cod or bacalao and at a good price.

This year he has just travelled the Via de la Plata from Seville, a long and hard road that, however, was not enough for him, so they continued on to Fisterra-Muxia. Actually, it was not the first time that he has continued on to reach the coast. For him the end of the Camino is to reach the ocean, the city and sanctuary of Santiago have their importance but he always follows on to the coast.

He has done all this walking tour with sports shoes, good ones that protect the foot, and much prefers them to boots. He has not suffered any problem despite the distance travelled. The rest of the year he usually walks but never performs a professional preparation. Maybe the first year, in fact, he was so prepared that he moved so quickly and almost did not feel the Camino because of the fatigue he felt.

Unlike his first time, he now comes to the Camino only with a one-way ticket, leaving the purchase of the return ticket for the last days, about ten days before or so.

As for his way of pilgrimage, sometimes he prefers to be alone and reflect for a bit on the past,  and he also likes the change that it implies with respect to his habitual way of life, the experience of living without many things. In fact, every year when making up the backpack you realize that you can do without more than the previous year.

In his opinion, the experience lived on the Camino with people is almost too perfect. You live in agreement with everyone, everyone seems to love each other on the Camino, but we must not forget that it is a utopia. You have to know little about life to believe that you can always live that way, only with good things and positive aspects, that’s why it is difficult to return to everyday life. When you return home you have to apply what you have lived and test whether  it can help you for something in the real world, with its mixture good and bad aspects. You have to try to keep the good things that are found in the Camino and try to bring them to everyday life as much as possible, but do not believe utopically in the impossible.

I summarize my experience, all my Ways so far, saying: what has happened is that a new window has opened in my life, a window that I occasionally want to look out of.