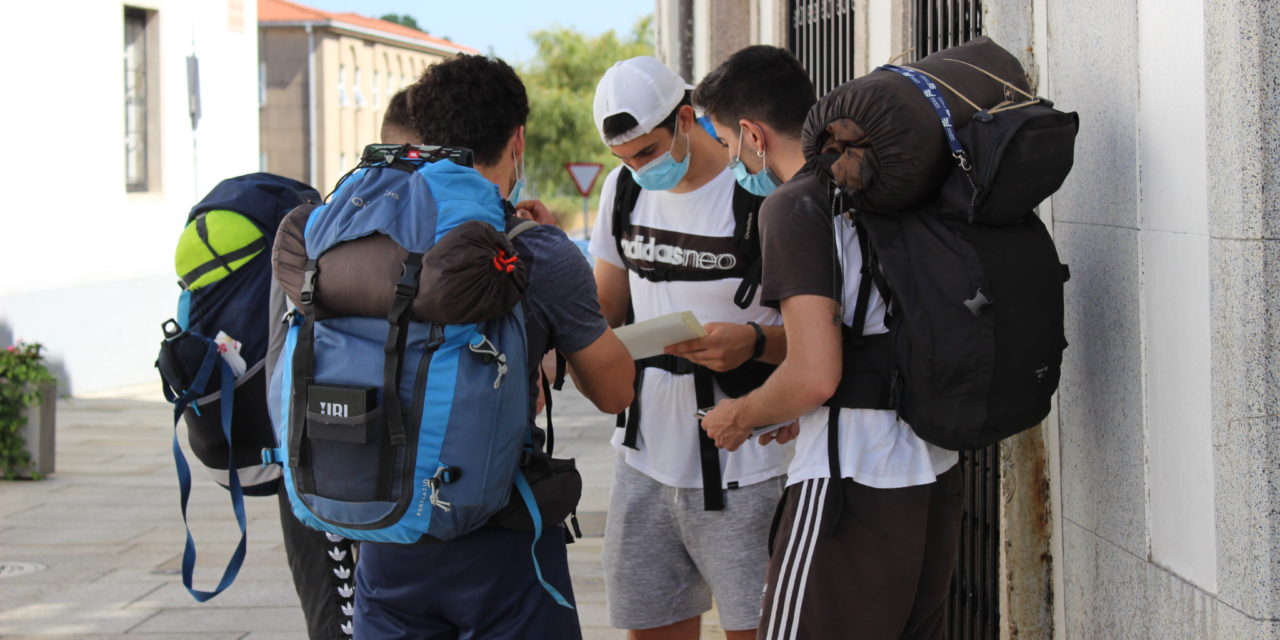 This has been our first experience. We decided about a month ago, we both had free time and we wanted to see each other and do something together, something different. The Camino de Santiago seemed to us an interesting experience, even more so in times of Coronavirus. We were interested in the possibility of following a route which meant us walking through places that we do not usually visit. Because we usually travel by car but we do not enter the towns, while on the Camino you walk through them, you talk to people, you get to know more about the place and the mentality of the people.

We couldn’t have imagined that on the first day we would already have giant blisters! In that sense, ours has been a road with a lot of suffering, because the injuries made things quite difficult, but even so, it was definitely worth it. The relationship with the people in the hostels and in the shelters made up for all the negative aspects. Our experience with the problem of the Coronavirus was to find fewer people walking, but, at the same time, a very familiar treatment, in the shelters and hostels of the Camino they treated you like family, you arrived in pain, but you forgot about it immediately thanks to treatment you received.

The truth is that we had problems, but we always carried on, we knew how to continue. It was difficult at first because of the pain, but we always tried to encourage each other and we succeeded. We laughed a lot about everything, we encouraged each other, as pilgrims we turned out to be a bit like “crazy people on the Camino” because we were always laughing and making others laugh. In addition, we not only shared our experiences and jokes with the other pilgrims, but also with our friends, every day we made videos that we sent them, we gave them a name: “radio Camino” we called them, it was a broadcast to share everything with friends .

Not only the relationship with people helped us, the good things compensated for the injuries and problems. There were also other very simple things that we found every day and that are a spectacle: vineyards, streams …

Regarding the pilgrims, in Portugal there were few people, but we met some: a Danish couple, two Spanish people from Madrid and two German women who accompanied us for almost the whole way. In the Spanish part there were many more people and we made many friends, for example, with a Valencian couple whom we met up with again days later and finally also in Padrón.

Really, the few pilgrims who were on the Camino formed a family, you got closer to the people and it was like being with a family. For example, last night, having dinner in Santiago, we met a group from Almería, very old people, and we were together. We greet each other on the Way, knowing that we are pilgrims is enough to be together, it is established as a brotherhood between pilgrims, that is what we feel: a brotherhood between pilgrims.

Solidarity is also important. If you see someone who is going wrong, you stop with him and try to help him, we saw that there are people who suffer and some who leave, we wanted to help.

In our case we arrived with bad feet, full of blisters, but a very high morale, we had to arrive and we did.

We suffered a bit for being beginners. For example, we started with a lot of weight in our backpack, with bad meal times … The day we walked from Barcelos to Ponte de Lima, we found ourselves asking each other: how many times have you thought about leaving it today ? We both suffered a lot, but when we finished the stage and regained energy, we laughed so much that we completely changed our vision of the Camino. In the Barcelos stage, Pedro kept saying “we’re in Ponte de Lima” and Nico threatened “I’ll take a taxi, I can’t take it anymore”… When the hostel was two kilometers away, we were feeling so bad that the lady from the bar  gave us a little present. Later we returned to that place for dinner and she treated us wonderfully, her treatment compensated us for all the pain. That was our Way: feelings, experiences, words of affection, smiles, conversations with the people in the towns.

We also noticed the difference between Portugal and Spain. In Portugal there were not many pilgrims, but the people of the villages had a huge desire to speak to you, everywhere, also the few pilgrims. Some spoke to you with such emotion that it affected us. In Spain there were more people and the kindness was just as great in the hostels and hostels, but in the villages there was not as much interaction as in Portugal, there it was incredible. Being able to travel through two countries on a Camino is important, learning to communicate and, in our case, one being Portuguese and the other Canarian, to see the country you are passing through with the eyes of the other.

It was an incredible experience, without overcrowding this year, with great peacefulness, but also with the possibility of meeting people who did not distrust you, who wanted to greet and welcome you. And then there was the important element of overcoming obstacles and meeting the challenge It was like this from the beginning, but also at the end: Pedro limped through his last 23 kilometers, it seemed impossible for us to get there … but when entering Santiago, without a cane or anything, he began to walk as if I had nothing wrong with him! And then it was spectacular to arrive at the Obradoiro square and lie down on the ground to look up at the cathedral.

It is important to meet this challenge and to have arrived despite everything. But even more so the human side, from the human point of view they were spectacular days: I give you a hand, always a smile, always try to help …the Camino is what we can keep. I would like to write a book. We had incredible experiences, but what was central was the experience of meeting people and the experience of our own friendship that sustained us. It was incredible! An important experience that we want to share with friends and family, with my 15-year-old son who I hope will do it one day (Nico). And we learned a good lesson: despite the blisters and the physical suffering, we believe that everything is in the mind, it’s all mental!